Want a discount? Become a member.
This product can only be purchased by members.
SKU: DSC-RODMAN-HOOPS Category: Medical Cannabis

The Hoops Diplomat, like all phenotypes of Ambassador Rodman, are named after Dennis Rodman in recognition of his efforts to create peace between the United States and North Korea.

On February 26, 2013, Rodman made a trip to North Korea with Vice Media correspondent Ryan Duffy to host basketball exhibitions. met North Korean leader Kim Jong-un. Rodman and his travel party were the first Americans known to have met Kim. He later said Kim was “a friend for life” suggested that President Barack Obama “pick up the phone and call” Kim since the two leaders were basketball fans. On May 7, after reading an article in The Seattle Times, Rodman sent out a tweet asking Kim to release American prisoner Kenneth Bae, who had been sentenced to 15 years of hard labor in North Korea. Kim released Bae the following year.

In July 2013, Rodman told Sports Illustrated: “My mission is to break the ice between hostile countries. Why it’s been left to me to smooth things over, I don’t know. Dennis Rodman, of all people. Keeping us safe is really not my job; it’s the black guy’s [Obama’s] job. But I’ll tell you this: If I don’t finish in the top three for the next Nobel Peace Prize, something’s seriously wrong.”

On September 3, 2013, Rodman flew to Pyongyang for another meeting with Kim Jong-un. Rodman said that Kim has a daughter named Kim Ju-ae, and that he is a “great dad”. Rodman also noted that he planned to train the North Korean national basketball team. Rodman stated that he is “trying to open Obama’s and everyone’s minds” and encouraged Obama to reach out to Kim Jong-un.

In December 2013, Rodman announced he would visit North Korea again. He also said he has plans to bring a number of former NBA players with him for an exhibition basketball tour. According to Rory Scott, a spokesman for the exhibitions’ sponsoring organization, Rodman planned to visit December 18–21 and train the North Korean team in preparation for January games. The matchups were scheduled for January 8 (Kim Jong-un’s birthday) and January 10, 2014. Rodman departed from Beijing on January 6. Organised by Paddy Power, among his entourage was the Irish media personality Matt Cooper, who had interviewed Rodman a number of times on radio.

On June 13, 2017, Rodman returned to North Korea on what was initially described as a sports-related visit to the country. “My purpose is to go over there and try to see if I can keep bringing sports to North Korea,” Rodman said. He added that he hoped to accomplish “something that’s pretty positive.” During the visit, Rodman met with national Olympic athletes, male and female basketball players, viewed a men’s basketball practice, and visited a state-run orphanage. Rodman was not able to meet with Kim Jong Un, but met instead with the nation’s Minister of Sports and handed off several gifts for Kim Jong Un, including two signed basketball jerseys, two soap sets, and a copy of Donald Trump’s 1987 book, The Art of the Deal. Other gifts believed to be intended for the leader’s daughter, included a Where’s Waldo? book and a jigsaw puzzle of a mermaid.

Rodman posted a video on Twitter that was recorded before he left for the visit, in which he and his agent describe the mission of the trip. “He’s going to try to bring peace between both nations,” Rodman’s agent Chris Volo said, referring to the strained relations between North Korea and the United States. Rodman added, “That’s the main reason why we’re going. We’re trying to bring everything together. If not, at least we tried.” Rodman further explained, “We’re trying to open doors between both countries. Just a little bit goes a long way.”The visit was sponsored by the cryptocurrency company PotCoin.”

Rodman visited North Korea again in June 2018, stating “I’m just happy to be a part of” the 2018 North Korea–United States summit and “because I think I deserve it. I think that I brought awareness to a lot of things around the world. And I think North Korea has given a lot of people this opportunity to do this conference now and I hope it is a success.” 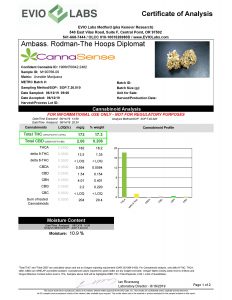 *Hybrid strains occur when expert breeders select the best sativa and indica strains and crossbreed them. Hybrids are frequently bred with other hybrids and can be sativa or indica dominant. So, depending on the dominant strain, they will have similar effects to their dominant strain.

Indicas are known to have more a sedative effect on the patient. Indica strains are ideal for alleviating the symptoms of patients suffering from insomnia and pain, but they also can alleviate symptoms of other diseases and disorders, such as:

It is important to recognize that we each have our own unique body chemistry, and that what works for one person may differ for the next.