Want a discount? Become a member.
This product can only be purchased by members.
SKU: DSC-VS Category: Medical Cannabis

Vegan Safari smells sweet, musky and skunky cookies with notes of ginger spice and cinnamon. The flavor is is also sweetly skunky, with a pumpkin cinnamon spice essence. People say it carries notes reminiscent of the strain Durban Poison as well. Vegan Safari has a super strong cerebral high, starting with a head rush that will feel like you’re going up an elevator. Genetics: Vegan Safari is a cross between Lionheart, Aculpulco Gold, Durban Poison and Cinderella 99 cannabis strains.

*This strain also has a pretty high content of the rare cannabinoid CBG witch works to fight inflammation, pain, nausea and works to slow the proliferation of cancer cells. Research has shown it also significantly reduces intraocular eye pressure caused by glaucoma. Strains high in CBG will be beneficial treating conditions such as inflammatory bowel disease, Crohn’s disease, and cancer. 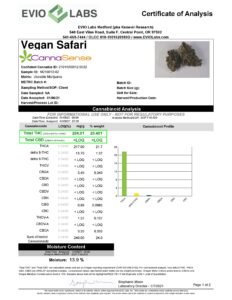 *Sativas are well known for their ability to relieve symptoms, while still allowing the patient to go about their daily life without feeling too tired or “couch-locked.” Sativa strains are known to alleviate many of symptoms for diseases and disorders such as:

It is important to recognize that we each have our own unique body chemistry, and that what works for one person may differ for the next.

When you consume a sativa strain you might feel: energized, thoughtful, focused, generally awesome and uplifted, with a stimulated head high. Sativas also have a lighter, more fruity aroma. In other words, if you want to be social, clean your house, have brilliant ideas, or manage to accomplish anything at all, sativas are your go-to. Sativas are also wonderful for physical activities and Rocky Mountain adventures.

There are no reviews yet.